skip to main | skip to sidebar


Pico de Las Nieves is the highest point of Gran Canaria, some 1,949 metres above sea level.
Except it's not really the highest point, because its neighbor rocky outcrop with a hole in it, Morro de la Agujereada, i.e. Holey Mountain, is a few meters taller. But you can't get on the top of Agujereada safely and easily, so Pico de Las Nieves is sold as The Summit.*  It's where you get the classic, the most postcardy view, with Roque Nublo, Roque Bentayga and Teide on Tenerife all in front of you.
I have been to it a few times, even watched the sun setting from there, but somehow failed to write it up.

This time my main aim was to time how long it would take me to get there from Cruz de Tejeda if I walked reasonably fast. I always stop to take pictures of course, but I tried not to stray off the main path (and almost didn't, at least on the way up)

The route is not that well signposted, not sure why. Or rather, it is signposted, but not to "Pico de Las Nieves". Starting from Cruz de Tejeda, you have to follow the signs to Roque Nublo first. When you start seeing "San Bartolome de Tirajana", or "Tunte" on the signs, follow these till you finally see the pointer to Pico de Las Nieves.

I followed a route that is signposted, i.e. I stayed on official footpaths all the time. This route on wikiloc corresponds to what I have done except there it is written in reverse. The distance they give is 5.3 miles, 8.5 km, and the ascent is 1352 meters (the descent in their case). On the map there are two obvious shortcuts, both at Llanos de la Pez, but neither of them is signposted in any way, so I didn't risk it. Next time maybe.
It took me two and a half hours to complete the route. It was not super-speedy, of course, but the ascent is considerable, so I am quite pleased with the result. I think the shortcuts would have reduced the time by half an hour. 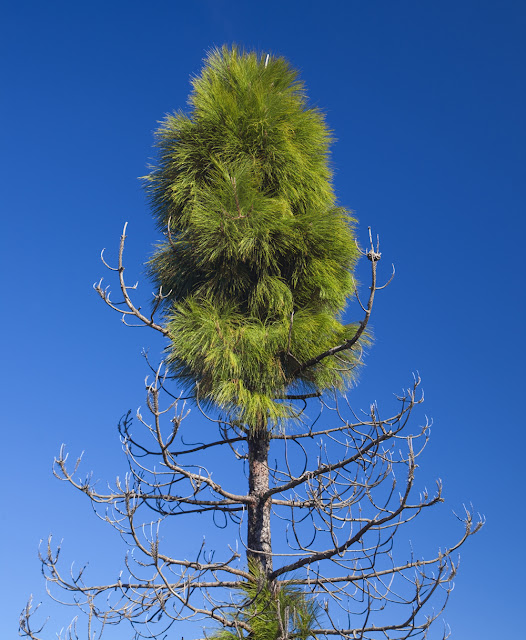 Two years ago wildfire passed through Las Cumbres, the tops of the island, coming right up to the Pico de las Nieves. Two years on, the Canary Pines, Pinus canariensis, have mostly recovered, although they have a funny bottlebrush shape, re-sprouting happening directly from the trunk.

There are quite a few patches of the forest with bottlebrush trees, and right next to them patches with a normal conical shape. Fire takes strange paths.

Pico de Las Nieves finally gets its own pointer only at the Degollada de Los Hornos pass, a big path intersection, when you are only a kilometer away from the end of the route. I don't think you can possibly miss the sign.

After you pass the Degollada de los Hornos you start meeting more people, because this leg of the route forms a part of path joining Pico de las Nieves and Roque Nublo.

Pico itself is never empty. Well, ok, I never was there at two at night, say, but during daylight hours there is always somebody there. People come by car, by motorcycle and by bike, and of course on foot, as I did. A word of advise - start taking pics before you come to the viewpoint. Not that there is any pushing and shoving going on, no. But the classic view is to the west, towards Roque Nublo and Teide on Tenerife, when taken from the main viewpoint, doesn't have anything in the foreground, so look for nicely shaped trees or rocks along the path.

What comes up has to go down of course. This is where it gets confusing and possibly unhelpful, but I will write it anyway.

I didn't want to go back the same route, so I started walking east, looking for alternatives. There was a pointer to San Mateo, route S-20, which I started to follow and promptly got lost. Don't know how, can't explain. Never mind, I thought, I will go down, because that's where I am going anyway. Very soon I found myself on the small road GC-134, and followed it. After a few switches between some secondary paths and the roads, I was at Cruz de los Llanos, where one road goes to Cueva Grande, another to Cruz de Tejeda and a hiking path descends to San Mateo. I knew this place and I knew that the path goes past Cueva Grande, so I went for it. At some point I started seeing the tiny village Cueva Grande itself, and started to look for side branches that obviously went to it. The main path, with its yellow markers, passes the village on the right, and I didn't want that.

There is more than one side path going to Cueva Grande, and I later realized I chose one of the longer ones. But it didn't matter - I was in a Cueva Grande bar-restaurant at a few minutes past three in the afternoon, which gave me just enough time to have a drink before my bus came along.

Now, the timing. The route is obviously not circular, and it took me in total just four hours, first the two and a half to ascend the peak, and then one and a half to get, by trial and error, to Cueva Grande. Which worked out superneatly, as it happens.

Bus 305 San Mateo < > Tejeda, which passes through both Cruz de Tejeda and Cueva Grande**, is not very frequent. One that starts from San Mateo at 10.30 takes you to Cruz de Tejeda by 11.05 - 11.10. According to the schedule displayed on the bus stop in Cueva Grande the bus on its way to San Mateo comes there at 15.32. If anything, it came a bit earlier, keep this in mind. Also, check the schedule of the bus before you set off in case of changes and roadworks.

So. Hope it was helpful and happy walking :)

----
* Not sure why, but a few people to whom I talked about it looked very doubtful about Agujereada being taller. When I got to the top of  Pico de Las Nieves for the first time it seemed blindingly obvious to me that it was. Maybe I am totally wrong of course, but when you are looking at something and the horizon line is level with the top of the object, that means your eyes are approximately level with the top of the object, while Morro de la Agujereada sticks above the horizon in a very obvious way. Do tell me if I am mistaken in my assumptions.

** I always thought about the detour to Cueva Grande that 305 makes as "pointless loop". There is hardly anybody who catches or gets off the bus there. Now I have changed my opinion - occasionally this loop is needed to collect free-range hikers.

Posted by Tamara Kulikova at 9:08 PM