skip to main | skip to sidebar

El Barranco de los Enamorados — or so I think at least :)


I wanted to find this particular ravine, El Barranco de Los Enamorados (or de los Encantados), ever since I saw some amazing pictures of it in Facebook. It proved to be not that easy — my excellent KOMPASS map doesn’t have this name, and all the local maps I saw so far don’t have even the most basic stuff, let alone barrancos. I wanted to join one of the excursions that are organized by local walking groups — that didn’t happen somehow. I asked for the directions and got contradictory answers (it’s close to Lajares — no, actually, to La Oliva — no, it’s very close to the Playa de Esquinzo — it’s to the left — no, to the right — actually, just carry on straight...). I asked to point it out on a map; even that was a bit vague. So. I am inclined to think people talk about somewhat different places, but all of those places share one thing — amazing smooth water patterns on the sandstone.
Choosing the directions that pleased me by their simplicity (“just take the unused branch of Lajares roundabout and carry on straight, you can’t miss it”) I went there with a friend. We followed a huge barranco that starts close to Lajares roundabout; when we came to the place where it separated into three branches we started to walk the middle one. We soon met a small group of people, all looking local, and asked them for directions, just to make sure. The main guy took the words out of my mouth — “El Barranco de los Enamorados? No, you took a wrong turn, we are going that way, follow us and then I show you were to go”. (So much for “it’s straight, you can’t miss it”). We followed them to where they parked their 4x4; he told us that “from here it’s probably one more kilometer that way”. Off we went. Problem is, barrancos tend to branch off. That day we took a “wrong” branch — it was nice and had some interesting sandstone structures which were probably petrified plants — but we haven’t found what we were looking for.
So, we went again. This time we found all the stuff you can see on the pictures. I am still not that sure that we found “the” barranco, but I will give the route we followed, and point out at least one alternative I found. I can tell you without false modesty that my pictures are a lot better than what I saw before, but can’t tell if that is because we found a better place or it’s just because I haven’t seen other pictures that do the place justice.

The walls of the barranco are about four meters at the highest points, and made of the crumbly sandstone (probably not that great for climbing). The most beautiful smooth patterns are found in the small branches, where you need to squeeze to go in. That should give you some idea about the size. Grand Canyon it ain’t :). But very beautiful nevertheless. 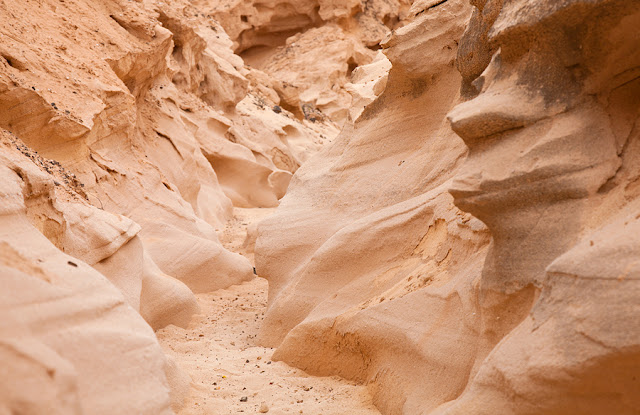 OK. Here is the route that we took:

BTW — the meanings of the names used are the Ravine of Enamoured, or the ravine of the Enchanted. Both very poetic :)

I will also leave here a reference to a somewhat similar place on Gran Canaria - in case you find yourself on the neighbour island : Barranco de Las Vacas (Cows' Ravine), route 1, route 2.

Hi Tamara,
Thanks to your 'guide' we found this wonderful place. We carried on at the top of the ravine and hiked over the volcanoes to the beaches south of El Cotillo. Then we caught the bus back from there to Lajares.
Truly enchanting linear hike of 10-12km.
SyS

I am happy you found it and liked it. Fuerteventura is a magical place

Thanks for sharing. We found it and it was a fun adventure ��

Glad to hear it, Julie

Thanks very much I used ur map and was amazed at what I came across, thankyou so much for taking the time to make to make this post!
Highly recommended for anyone thinking of doing this route!

Glad you found it useful, Alex